Cleveland, Ohio brush manufacturer Precision Brush was founded by Lloyd Benjamin in 1951. In 1987, his son Jim Benjamin started at the company and worked his way through sales and management until he became company President. These days, Jim works to build business connections with both local companies and those all over the world through his participation in EO, the Entrepreneurs’ Organization.

EO’s purpose is to engage the world’s top entrepreneurs in learning and growing from interaction with each other, personally and professionally. It is an invitation-only group with the qualification that participating members must be the owner or founder of a business with a minimum of one million dollars in annual sales. The organization has 155 chapters spanning 48 countries and more than 11,000 members. Jim Benjamin is the President of the Cleveland, Ohio chapter. 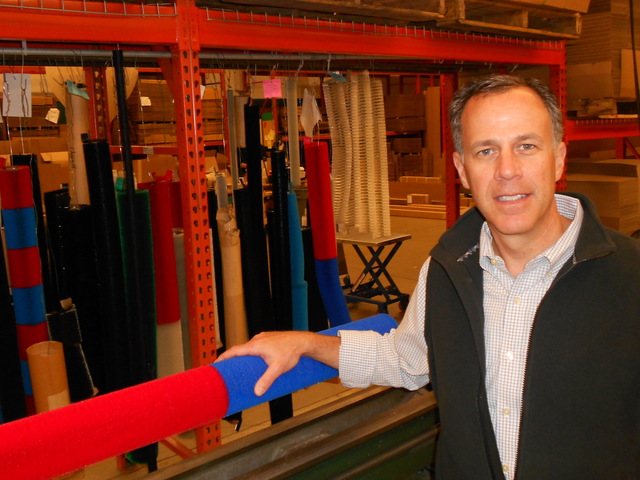 Jim Benjamin’s work in the local Cleveland EO chapter has him offering pertinent trainings and info sessions to local entrepreneurs at their monthly meetings. Topic examples include boosting Internet research skills, how to put together a strong sales team and a how-to for today’s best hiring practices. Additionally, Jim liaises with the city’s largest companies and banks, introducing his chapter to contacts such as the CEO of Sherwin Williams or the President of the Cleveland Federal Reserve.

On a more personal level, the chapter includes what they call forums, which consist of only six to ten members. These smaller breakout groups are completely confidential and give members an opportunity to share both their joys and their hardships, in life as well as business. “You end up being pretty tight with the people in your forum,” says Benjamin, “sharing all kinds of things that you don’t necessarily feel comfortable sharing with employees and family.”

This give and take with other entrepreneurs at the personal, local and global levels enriches not only the lives of the entrepreneurs involved in EO, but also their employees and communities. “It’s one of the highlights of my life,” Benjamin says.

Print
Posted by Brian Pritchard in General
Most Recent

Precision Brush Is Always Perfecting Our Processes Improvement is one of our core values at Precision Brush. What that means in practical terms is that we are constantly open to and actively exploring new ways to make things better from our products, to our relationships and everything in between. Within the ever-evolving world of technological, personal, and professional development, improvement is not a destination; its not a place our employees or products will someday arrive at. Instead, its an exciting path of growth that we nurture each day as we improve aspects of custom brush manufacturing from taking customer orders, to fulfilling vendor requests, to creating ever more efficiency in our delivery timelines, and more! One of our mottos is: If you have a better idea, share it! We ask all our employees to keep their eyes open for things that can be improved, and to speak up if they notice any process that can be made more efficient or better for any reason and we invite our

Try Our Quick Quote Service for Your Next Metal Channel Strip Brush Order Precision Brush Company has designed hundreds of thousands of brush configurations since the start of the company in 1951. We were one of the first companies to create software that enables us to quickly and accurately quote new designs with many levels of price breaks. Our constant attention to this process has allowed us to stay ahead of our competition while providing the best service and quality in the industry. In fact, we are often already sending custom-made samples to our customers before other brush companies can even send out a price quote! How Do Quick Quotes Work? Many years ago now, we created a customized software program to quickly and easily automate custom metal channel strip brush pricing. The software is constantly adapting to include sales rates and numbers for every metal channel strip brush we make, taking into account each brushs materials and specifications in addition to pricing and quantity. When

Precision Brush Now Accepts Cryptocurrency Payments In a bold move to make payments easier than ever no matter where you are in the world, Precision Brush is now accepting payments in Bitcoin, Ethereum, and Litecoin. Opening the doorway for cryptocurrency payments gives overseas customers an important money-saving alternative to traditional payments such as wire transfers or credit cards, which can have steep fees. Were excited to be leading the brush manufacturing industry in creating a new set of secure, easy-payment solutions for our customers, says Precision Brush President Jim Benjamin. A Quick Cryptocurrency Primer Wikipedia defines cryptocurrency as a digital asset designed to work as a medium of exchange that uses cryptography to secure its transactions, to control the creation of additional units, and to verify the transfer of assets. Basically, its: Digital money created and exchanged via software coding An exchange of currency that occurs outside of any governmental